Getting Political to Save Libraries

Getting Political to Save Libraries

Libraries and politics have been intertwined for decades.  Once the first tax-supported library opened in 18331, our funding, purchasing, and even hiring became tied to elected officials and publicly approved budgets.  The people’s vote determined our future.

Libraries and their advocates have engaged in political activities throughout the history of public libraries in the United States.  According to Founding Mothers: The Contribution of Women’s Organizations to Public Library Development in the United States2 women were instrumental in the founding of many libraries in the US after the Civil War.  One way they did this was advocating for library funding from the government: local, state, and federal. These women used political means by directly lobbying their government officials.

Jump forward to today and we find many of these very same libraries struggling for funding to stay alive.  However, we have gotten out of the practice of lobbying the people and the government agencies to continue funding what is a valuable community institution.  In fact, librarians often loathe being involved in the political process that directly affects their funding and even the very existence of their institution.

How do we change this?  By not taking community and government support as a given. By learning how government and politics work. By thinking like politicians. By understanding political strategy.

EveryLibrary is a nonprofit social welfare organization chartered to work on local library ballot initiatives. It is the first and only national organization dedicated exclusively to political action at a local level to create, renew, and protect public funding for libraries of all types.  EveryLibrary is a non-partisan, pro-library organization with an alignment toward sustaining libraries as they evolve and grow in the 21st century.3

Patrick “PC” Sweeney is the Political Director of EveryLibrary and, with John Chrastka, Executive Director, has written “Winning Elections and Influencing Politicians for Library Funding” and “Before the Ballot: Building Political Support for Library Funding”, both available from ALA Editions and available with a bundle discount at fundlibraries.org. Patrick agreed to sit down and answer a few questions for our blog.

MP: What is the biggest myth about libraries and politics that we need to overcome? And why?

PS: There are quite a few myths and at some point in my career I am guilty of believing all of them! The biggest, and the one that worries me the most, is a misunderstanding about what political activities libraries and librarians – and even library organizations – are allowed to participate in or how our industry organizations are allowed to work with political organizations. In fact, there are a lot of things that librarians, libraries, and library organizations can do that are very political and help build political power for librarianship. I’m not 100% sure where to start addressing this issue because it is complex and there is a significant history of misinformation in the field that we need to address in order to move forward.

However, it should be noted that there is no law against 501c3 organizations or individual librarians working or partnering with a 501c4 organization like EveryLibrary (except for some federal jobs, but that is very limited). In fact, several state library associations are themselves 501c4 organizations, such as our colleagues at the Iowa Library Association and the Washington Library Association. They already work with and for libraries, and their designation under the IRS code allows it. Also, most of the campaign laws apply primarily to candidate campaigns and not ballot issue campaigns. Supreme Court Ruling on ballot issue spending limits sets the precedent that candidate PACs and ballot issues are fundamentally different. So there is a lot that our industry can do politically since our campaigns are entirely centralized on ballot issues.

While there is a lot to talk about here, there isn’t enough room. For anyone interested in learning more about the legal limits of political activities for 501c3 organizations like friends groups or government organization, I would suggest visiting a few of the resources that further explain it. For example, nonprofitvote.org, the Ballot Initiative Strategy Center, or bolderadvocacy.org.

MP: There is the fear that “rocking the boat” will cause more problems and people will stop supporting the library if we get into the politics of government funding. How do we address that?

PS: We see this a lot and it’s one of the things that really concerns me because we are one of the only industries that I know of that worries about this. The police or fire, public safety in general, is wildly political and very politically savvy. They have their own Political Action Committees and well-funded lobbying groups which means that the public safety industry is very well organized and influential and therefore they are very well funded. Likewise, the healthcare industry and energy industries are extremely political and therefore also very well-funded. We see 501c3 religious organizations telling their followers exactly how to vote or who to vote for.  Of course, for-profit industries have significant reaches with their Political Action Committees (PACS) and we see non-profits with significant political power and influence. Our lack of willingness to get involved in the very ecosystem that drives our funding mechanisms is exactly why we are losing funding for libraries and seeing libraries close. I’m not sure how to get librarians comfortable with asking for the funding that they deserve or building and wielding the political power and influence that our industry needs in order to make that ask more effective. But if we don’t we won’t be here much longer anyway.

The real truth is that city and county politicians and government administrators don’t want libraries to have the same political power that the Police or other organizations have in their communities. If a library built that power and influence, then that threatens those leaders’ positions. They are no longer free to cut libraries and library funding. They would have to “deal” with another powerful entity in their communities and they definitely don’t want that. That’s why we’re told that we’re not allowed to “be political” but a closer reading of the law and the precedents set by other government organizations proves that simply is not the case.

MP: What should libraries that aren’t currently threatened by funding cuts or closing be doing to secure their funding?

PS: The scary truth is that they will be threatened one day. We have seen so many libraries that believed that since they are safe now that they will be safe forever. However, we’ve then seen a large Tea Party or anti-tax movement begin within the community and suddenly their funding is threatened. As anti-tax and anti-government organizations like Americans for Prosperity or the Hoover Institute grow in size and influence, we will see those sentiments carry into public discussions and since libraries are tax funded government organizations we are going to see those threats continue to grow. In fact, we are already seeing their influence affect the public’s sentiment about funding libraries. The 2018 OCLC report From Awareness to Funding, found that libraries have lost about 16% of voter support in the last ten years. That is truly terrifying and the only way to address it is in the years before there is a crisis. In such a short blog post I can’t say what libraries should be doing to counter this loss of support, but we do have a book coming out in spring from ALA Editions called “Before The Ballot” that will address this issue quite a bit. You can order it now at a discount as part of the library funding bundle by visiting libraryfunding.org.

MP: What’s the one piece of advice you would give library staff about politics and library funding?

PS: The biggest piece of advice that I have is that we need to start thinking about the political nature of library funding. In fact, 90% of library funding comes from the will of the local voters and the local politicians. The most influential thing in a community, and the factor that motivates people to support libraries most, is their relationship and their belief about their librarians, not the library itself. That means that librarians have the biggest role in ensuring that the voters and politicians support libraries so that their libraries are funded and able to continue to employ them. What all that really means is that if voters have such control of our employment then librarians need to understand that they are essentially political candidates whether they like it or not. Of course, what that means is that librarians need to start learning the skills, tactics, and political theories that politicians use to get elected or remain in their positions.

1The first free public library supported by taxation in the United States was the Peterborough, New Hampshire Town Library, which was founded at town meeting on April 9, 1833. A History of US Public Libraries (n.d.) In DPLA Exhibitions. Retrieved October 17, 2018 from https://dp.la/exhibitions/history-us-public-libraries/beginnings/first-public-libraries

3 About Us (n.d.) In EveryLibrary Retrieved October 17, 2018 from http://everylibrary.org/about-everylibrary/ 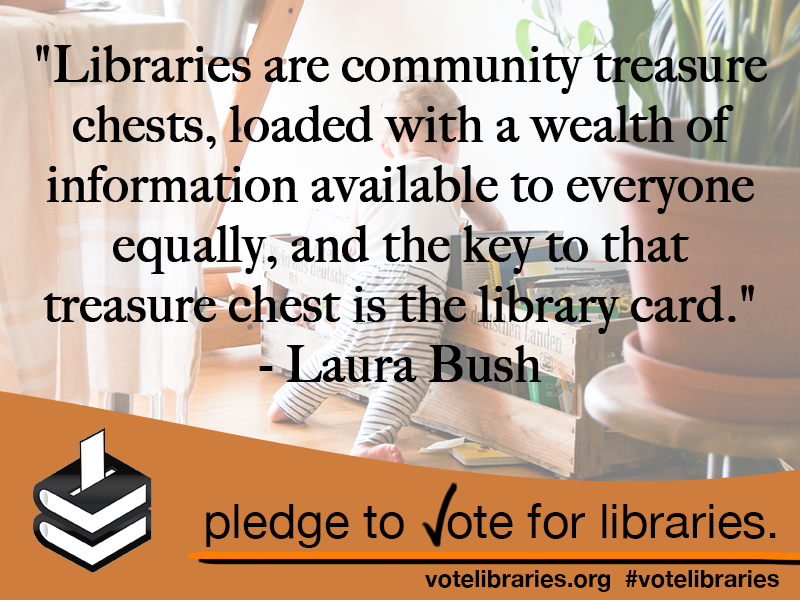 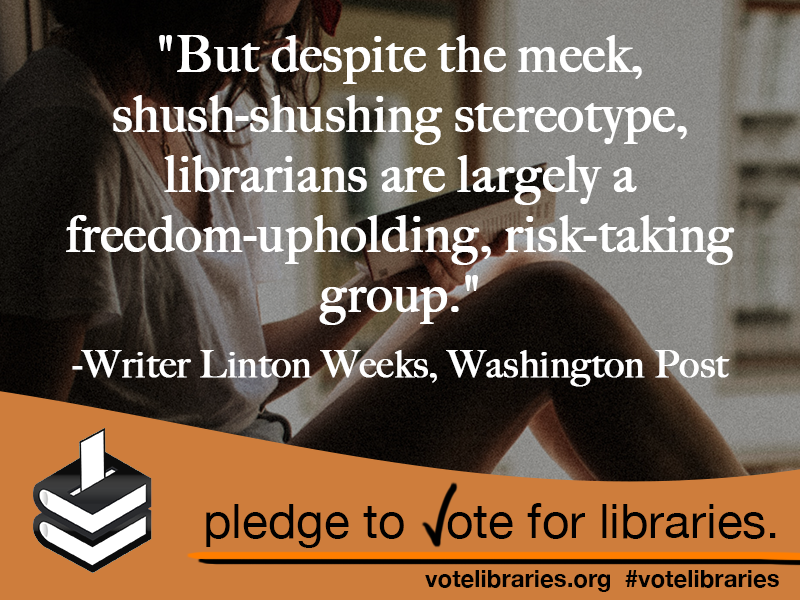 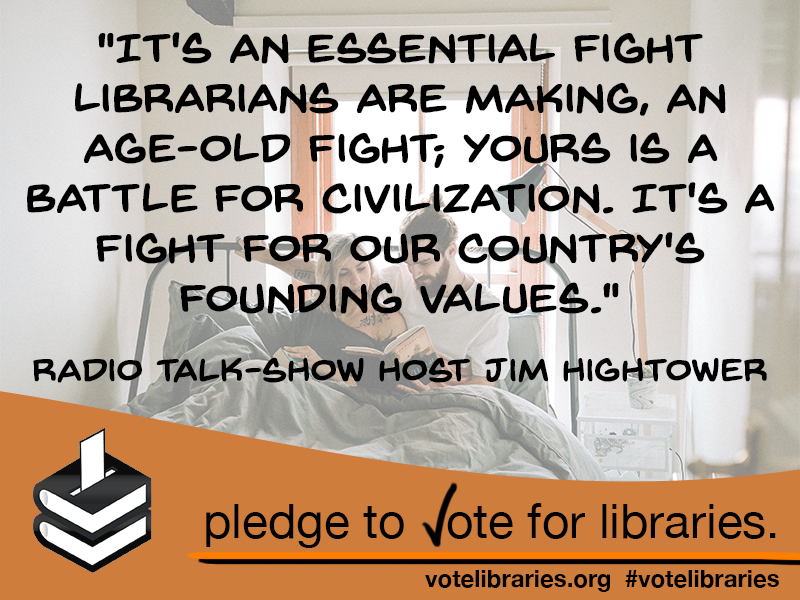